I didn’t “become” a writer until late in life, in my 50s. Even now, it makes me cringe, to  call myself a writer, because in my mind a writer is someone who is published, and is selling tons of books and generally being admired by society. My bloggy ramblings and pithy twitter comments do not a literary genius, (or even a V.C. Andrews,) make. I feel like a fraud calling myself a writer.

It’s such a cliche, too. God, I had a nervous breakdown and lost my job so now I’m a writer. So fucking lame and hipster of me. I’m sorry. I probably need to go buy a manual typewriter, just to seal the deal.

ANYWAY, when I had my fierybraincrash™, and the metaphorical smoke had cleared, I started to write, not for anyone else but for me. And it kind of saved my life.

So, the fraud thing. I know that I’m not the only one who feels it. A lot has been written about the phenomena of seemingly accomplished people fearing that at any moment they will be discovered as the pile of turds they actually are.

For me, the fraud alert goes way back. As a 3rd grader, I was a bespectacled mess. My parents loved me, so I’ll kindly describe them as “benignly neglectful.” I routinely attended school in dirty clothing,  my hair a rat’s nest. Puberty was on its way-not quite there, but hinting around, giving me a slightly gamey smell.  However, hygiene was not a priority in my household. Somewhere around this time, I took one of my very occasional showers, and from outside the bathroom door my mother helpfully provided me an important grooming tip, the only one she would ever give: “make sure you wash your c*#t whenever you take a shower.” So I had that going for me.

My saving grace? Books. An early reader, I regularly devoured whatever I could get my grubby fingers on. By some divine intervention, our really disgusting apartment was located literally (hah! good book pun there!) across the street from the library. If I wasn’t at school (which was often, since my parents felt that school was just another way for the “man” to shape me into a real square), or asleep (rarely, what with the no bedtime rule and the mattress on the floor next to the Schlitz Malt Liquor sign that was my “bedroom,”) I was at the library. Even my cat went to the library. Mr. Spock, a giant easy-going gray tabby, would follow me over in the morning, stroll through the doors and jump up on a sun-warmed table for a snooze while I combed through the shelves looking for something good to read.

It occurs to me right now that this post has kind of gone off on a library theme and I was going to talk about writing, being a fraud and Mrs. Walls. I’ll get back on topic.

So I identified as a reader. It was my thing. I was a bookworm. I think that label perpetuated itself over the years, leading my classmates to believe me to be a “brain,” even when I was failing all of my classes and attending what would eventually be my 5th year of high school. I was always surprised when someone called me smart. I sure didn’t feel that way.

When I was diagnosed at the ripe old age of 53 with Attention Deficit Disorder, I finally understood why I felt stupid and lost most of my school years. Back then, I just figured I’d somehow pulled one over on everyone. I spent a lot of energy on smoke and mirrors, making sure no one knew just how stupid I was. (This took a tremendous amount of energy, by the way, energy that would’ve been much better spent on algebra tutoring.)

At my K-8 school, (the horrible concept of Middle School hadn’t yet been invented,) there was one teacher you definitely did not want to get. Her name was Mrs. Walls, and she was “tight.”

I know that tight now means awesome and cool, but in the 1970s, tight was not a compliment. “She’s so tight” was a phrase reserved for the meanest grownups, the ones who were super strict and might possibly beat you. She was widely regarded as the “tightest” teacher in the school. A popular refrain amongst my schoolmates was “I don’t care who I get, as long as it isn’t Mrs. Walls.”

I actually cried when I saw my name on Mrs. Walls’ 3rd-grade class list. The only consolation was that my best friend Cathy was also being similarly punished, so at least I’d have company.

But, contrary to her scary reputation, Mrs. Walls had an approach to education that would’ve been a better fit at an alternative school. In this average suburban, lower-middle-class public school, she somehow got away with carpets and couches in her room and meditation sessions.

It turns out that everyone needs a Mrs. Walls in their life, or at least I did. I have no quantifiable way to determine if she truly was a gifted educator,  (I think she probably was,) but she was the perfect teacher for me. She was a blowsy hippie, a single mom, and since my life was filled with these types, I was at home with her right away.

She was warm but strict. Liberal, but tough on the basics. She had a piano in her room. Every afternoon when it was cleanup time, she’d sit down and play “The Spinning Song,” our signal to get the place together before the song’s conclusion. She read to us every day, introducing me to one of my favorite authors, Zilpha Keatley Snyder. Ms. Snyder had such an impact on me that I named my first child after a character from her book “The Changeling.”

On Fridays, we all lay in a circle in the middle of the room and practiced meditation and relaxation. It was quite common for some of the most unruly students, even Ricky Keller, to end up snoozing peacefully. (Which was no doubt Mrs. Walls’ intent. She was no dummy.)

Mrs. Walls always called me her writer. I was kind of insulted by this, because everyone knew I was a READER, dammit. Also, I worried that she called me a writer merely because of an error I’d once made on a poetry assignment. I think we were working on haiku. In my mildly (undiagnosed) dyslexic brain, I transposed some words, turning “I was happy and gay” to “Happy and gay was I.” Mrs. Walls trotted out that poem to several other teachers and my parents, saying I had such a poetic way with words.  I was too embarrassed to admit it was a mistake and so I played along, “yeah, I totally meant to do that.” (Fraud! I was a fraud!)

I was in tears again at the next class posting, but for a different reason. Mrs. Walls was teaching 4th grade, but I was placed into another classroom. As the students lined up in the hallway to walk to their new class, I sobbed uncontrollably. On this Bataan death march to the door of Mr. Fong’s 4th-grade classroom, I felt an arm reach around my shoulder. Mrs. Walls deftly folded me into the line headed to her classroom. Even now, I tear up when I think of this. This was a time when teachers routinely had 35 kids in their class, yet Mrs. Walls took me in, voluntarily.

By some stroke of luck, each year as I moved up a grade, Mrs. Walls moved up along with me. I was fortunate enough to have the same, perfect-for-me, teacher for 4 straight years. During the most formative years of my life, education-wise, I had one stable influence. My parents might be drinking, fighting and throwing plates of creamed corn at each other, but once I got to school I could relax. Yes, there was boring stuff I hated, like multiplication tables and fractions, but there were no surprises. I needed predictable patterns. Math was in the morning. After recess, we had Social Studies, (and I’m guessing not many other teachers at the time were focusing on the Vietnam War, but Mrs. Walls was,) and in the afternoons, the reward: we read. When Mrs. Walls sat down at the piano and the first strains of “The Spinning Song” popped out, we knew it was the end of the day.

Mrs. Walls wasn’t an easy teacher. My grades during those years were not those of a star student. Reading at a college level, with Bs and Cs and my report cards, I was forever “not living up to my potential.” I was always in trouble due to my terrible penmanship and my outrageously messy desk stuffed with old papers and books that I practically had to sit on top of to shut..but I loved Mrs. Walls, and she loved me. I have proof: 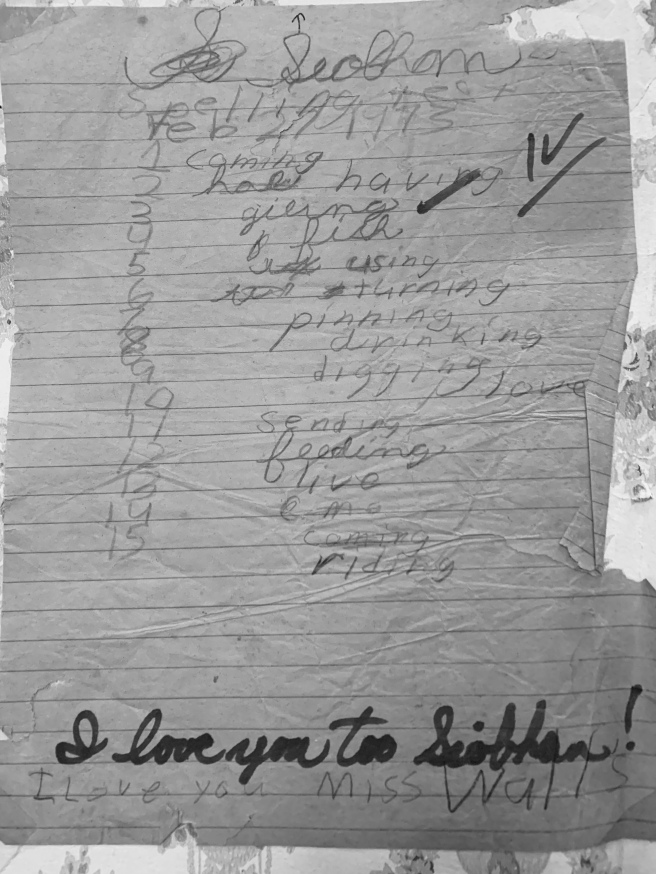 I need to take my fledgling blog off-line for awhile. I’m still writing, still here…but I won’t be publishing anything new for a few months.

See ya on the flip side 😉

THEME SONG: “Alive” by Sia. Will remind you that you are in fact alive, despite having spent 10 hours ranking paper towel logo preferences and watching clips from “Jay Leno’s Garage.”

SURVEY (ha!) SAYS:  Fail. Not worth the mind-numbing effort. END_OF_DOCUMENT_TOKEN_TO_BE_REPLACED

As promised, today’s post is all about the various things I’m going to undertake over the next 6 months, in my great “make money from your own home” experiment.

Before I get to the list, I need to say that creating this blog was both cathartic and TERRIFYING. I didn’t know how my friends and family would react. Coming out with your mental illness is a scary, scary thing, and I decided to just rip off the bandaid and show everyone how deep the wound is. END_OF_DOCUMENT_TOKEN_TO_BE_REPLACED

In August 2015, I had what is colloquially known as a “nervous breakdown”, but clinically referred to as a “psychotic break.”

I prefer nervous breakdown, even if it’s not considered a real medical term. Psychotic break sounds like I lost touch with reality, when in fact the exact opposite was the case. Everything was really, extra real.  Like, way too real. And I was nervous as fuck, so I’m sticking with nervous breakdown. It feels the most true.  END_OF_DOCUMENT_TOKEN_TO_BE_REPLACED